Baby it’s cold out there…

After the snow and wind earlier in the week we were promised some sunshine and out it came, along with half a dozen or so 2CVs and a Mehari for the early Spring meet. Not that a few flurries of the white stuff would put anyone who owns a 2CV off as apparently they are the best cars in a snowy crisis!

First to arrive at St Catherine was Fast Eddie and Helen & Debbie soon joined him in Terry Le Main’s Gogo Bar for a quick bacon roll before the other tin snails arrived. With the ugly plastic conservatory having blown away, everyone was able to watch the parking skills of the later arrivals whilst congregating at a leisurely pace in the café before setting-off towards the Goose on the Green. Even Peter (our chairman) was early (his coughing was preventing him from lying in), and he was swiftly followed by the Pallots in the 2CV with no name, Duarte & Paula in Cecille, and the Austin-Vautiers in Quackers.

Fast Eddie took off to lead the fleet on an interesting route through the delightful lanes in the northern parishes, taking in St Martin, Trinity, St John, St Mary and St Peter. The pace was good and we managed to stay together, amusing many onlookers as we glided past. There were a few challenging ascents thrown into the mix, when one driver who shall remain anonymous took a late decision to drop down into first gear and consequently backed-up the fleet who were soon on his tail. The hedgerows were looking beautiful in their coats of many daffodils.
As we neared St Peter’s Valley we took a pretty short-cut down La Rue de la Potirons and La Dimerie, and at that stage we thought Eddie might be leading us down his new cycle route through the valley, but it was already being well-used so perhaps we shall save that for another day. 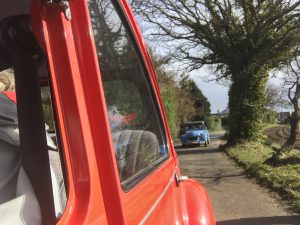 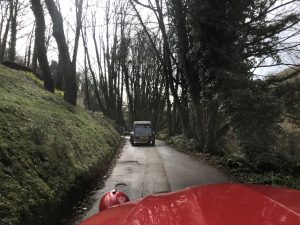 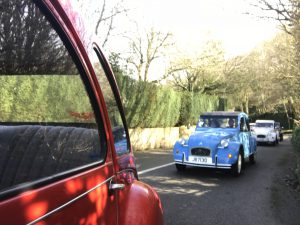 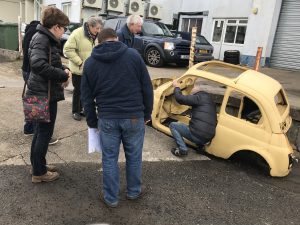 Having parked at the Goose we were met by Spencer and a very fetching yellow Fiat 500 which drew great interest from the car collectors within the group. As keen as they might have been, even this one was perhaps one challenge too far. But who knows…….
Over a coffee in the pub, Eddie collected forms and money for the French meet in June at Lanveoc. It seems there will be a good contingent going from the 2CV Club de Jersey – everyone is welcome so if interested please get in touch with Eddie or Murielle for further details. A la prochaine……