The Britanny meeting in Mesquer.

We arrived at our chalet before Steve Lynne Helen Ben & Millie as we’d gone to Rennes for the fete de la musique which was great!
Our chalets were perfect for 35euros a night. Did we laugh though. There was a welcome pack which we thought was a box of tissues. Having just come back from the hypermarket to buy sheets we then looked to see if there was any toilet paper no nothing.
Ben & Helen were next door to us and off to the Carrefour we asked if they could buy loo rolls I think Lynne asked for some too.
Later we were kicking ourselves there was a loo roll in the welcome box which looked like tissues!!! With a scouring pad and a sachet which looked like showergel but a kitchen cleanser.
We all thought the fridge was on but the beers were still warm dooooooooooooh we were supposed to put the switch down!

We walked to the campsite which was getting fuller by the hour of 2CV’s, was only a little way but at night with no street lights seemed further. Thanks Steve for taking us all back in 2 runs! Both nights you are a star. Great taxi service!
We were offered our 2cv goodies. An apero, and ate in the big sports complex. Saute potatoes with shallots and lardons. I don’t think there was enough to go around. 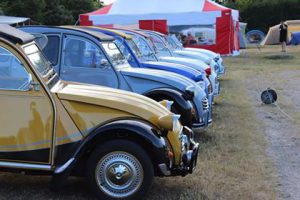 We all met at the campsite breakfast was provided then in convoy we were taken to a boat builders their craftsmanship was excellent.

We stopped at a hypermarket for picnic food and joined the French in a field. So funny Lynne is so organised had a fold up table, cool box ,napkins, you name it. Not forgetting the tablecloth which she only found when we were packing up. Etiquette at its best. Mind you the French all had tables and wine glasses.
Next we were taken to the salt factory Sel de Guerande we all purchased a few souvenirs. It was amazing. We snaked through the salt pans in convoy there must be some amazing photos.
Then we all followed each other to a cider tasting place where you could purchase more goodies in their shop.
We stopped in Piriac lac sur mer which we’d never been to, we all had a drink under the tree what a charming little place. We were 9 in total plus Millie. Had no idea Ben & Helen had been bringing their girls there over the years. Can see why though.

We 6 at the chalets had a little apero before joining the others. 3 people even had swims. 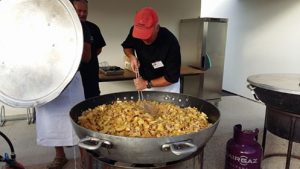 Back at the campsite the chef was remarkable he cooked for over 300 people moules frites. There was a crab starter and an apple tart. The funniest thing was the chef blew his whistle each time the food was ready so it was served piping hot. He was truly amazing!!!!
We didn’t know we had to get up on the stage, we were given a trophy and a wine companion set which we never expected just for being there from little Jersey. Millie our mascot came too you wouldn’t have known she was there at all.
Lots of speeches that night hard to hear with the Bretonne bagpipes playing too. We managed to have a dance it was a great evening. 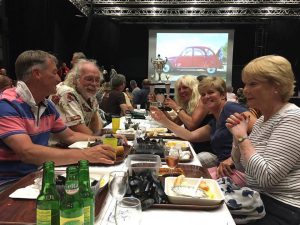 We all packed up and drove for breakfast at the camp. Sadly Lynne & Steve had to leave us as they were back on the boat home in the afternoon, we did have some laughs together.
Another convoy was organised to drive to La Baule and show off our cars on the long esplanade we were lucky with the weather for the whole event. We lost the first guys we’d been following at the traffic lights but on a side street a whole lot of 2cv’s came onto the esplanade so we followed them. It was brilliant. La Baule was so beautiful.
We had to be back by 12 30 for an apero .

Came back to the campsite, we waited around quite some time then there were a few thank you speeches then bretonne cider and nibbles.they were still cooking moules frites for the few that were still there for lunch. We’d planned oysters and muscadet for lunch which we’d bought from the supermarket the night before and left in the fridge which was on this time !! We ended up staying with Susan her friend Peter and Ben Helen & Millie.
We then all parted, we were staying in Vannes to see family. Sayed in Carnac on way back had lunch in Trinite sur Mer then off to St Malo

What a brilliant week so glad we went along. We missed the ones who couldn’t make it you’d have loved it. We met some real characters. 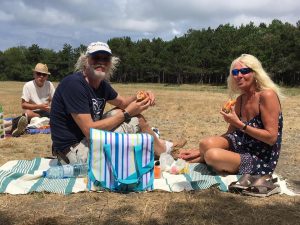 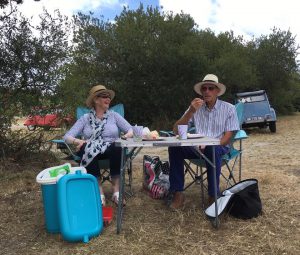 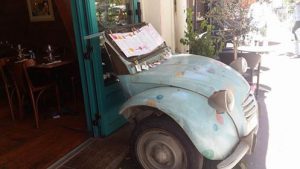 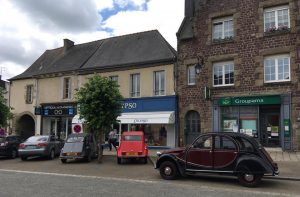 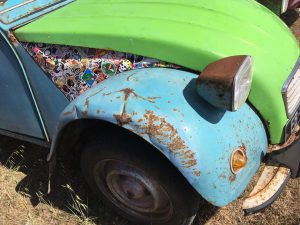 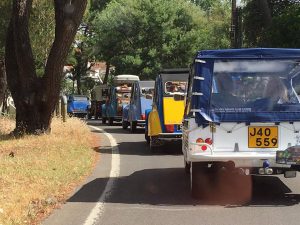 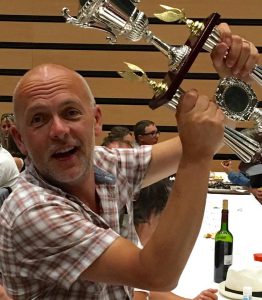 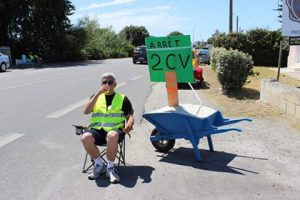 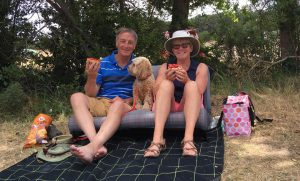 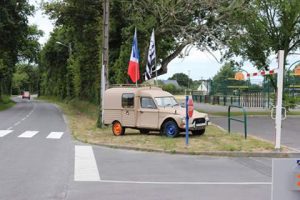 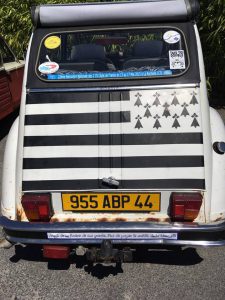 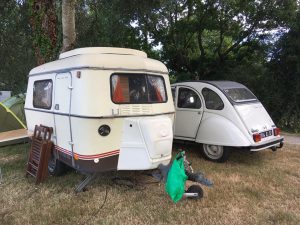 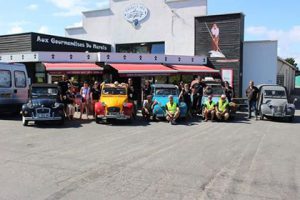 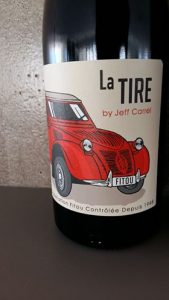 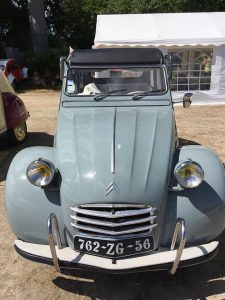 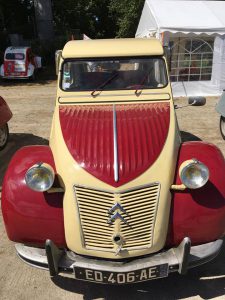 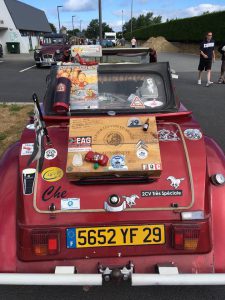