We thought we would cruise gently into the new year with a leisurely little pootle through the lanes to welcome in 2019 as we mean to go on.
It was a relaxed 10.30 meeting time at the oh so attractive Waterfront Car park. The weather was dry and the spirits were high as we all congregated and met old and new friends. Old friends know who they all are (if they can remember, that is!), and new friends were met with hearty handshakes and nods of approval to the new Citroens in the clan. Annie & Gary found a Frenchman to befriend and Jason was there with his trusty old Citroen which Chevron will soon be knocking into shape, and this is before he brings his Dyane to the Island. He is a long-time fan of 2CVs, having owned 2 Charlestons many years ago, so full of knowledge to be tapped, I am sure, especially that on performing the perfect hill start.

New kid on the block

We thought we were seeing double when the new Dolly on the block arrived. A beautiful green & white belonging to Sandra & Paul, delighting the crowds & stunning Clive & Sylvia as even her striped seats were identical to theirs. Hopefully Sandra will soon be back at the wheel following her baptism of fire to the Fast-Eddie vertical route……more of that to follow.

Jo came flying in with Celeste, cursing the plague of traffic lights between town & Gorey, but it was great that she was able to say “hi” & “bye” before doing the airport run. 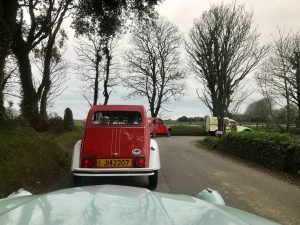 So 10 of us trundled off towards the west (much to Clive P’s delight as he had to do East last week!), re-grouping on the road through the very beautiful Waterworks Valley, lulling us into a false sense of security whilst admiring the geese and toads.

Fast-Eddie led us through some little-used country lanes, managing to avoid the joggers and cyclists en route. Somehow we ended-up at the eastern end of the runway as we came face-to-face with the landing lights – I was starting to think at that stage that we might be giving the Airbus A320s a burn up on the runway. 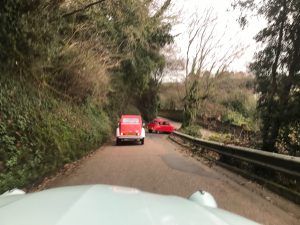 We ended-up cruising past the the Porsches and down Le Mont Des Vignes (is Scarlet the only 2CV who can’t manage that hairpin at the bottom on one lock?), past Netherby Court and out onto the Coast Road towards St Aubin. This is when it started to go wrong in that some of us wanted to branch right and up St Aubin’s Hill, but Fast-Eddie had other ideas and veered left so off we went along the Bulwarks and up Ghost Hill……

Millie was starting to stress (reminiscing from last week’s hill start disaster), but she cruised up with no issues. Further back in the fleet the air was turning blue, so much so that Sandra failed to find first gear and calmly (not) removed herself from the car and announced she was walking home!! Fortunately Paul slid over to the driver’s seat, gave Sandra a valium & persuaded her back into the car & completed the hill climb. 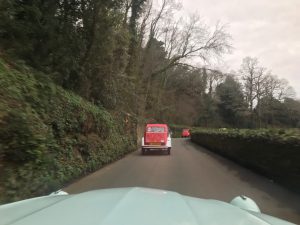 Blanche (carrying Jac’s 94 year old Mum who can’t quite believe how social we all are) was breathing-in towards the top of the hill to squeeze through the Sunday drivers going downhill, and we eventually all ended-up at Portelet Inn where we were met by Steve & Lynne.

Hot chocolates, coffees, teas and Brandy (medicinal purposes for some of the newbies) later, we all caught-up with Christmas and New Year exploits and thoughts of summer 2CV outings ahead. Santa’s little elves in the form of the Austin-Vautiers arrived with a sack full of lovingly packed gifts for us all. There were smiles all round and even Fast-Eddie was forgiven for turning left and not right.

See you all again for our next drive on the 3rd Feb – 1pm at Highlands College.