The Sun is shining

After the torrential rains of yesterday who was followed by the howling winds who rampaged through the island last night, it was hard to believe that the sun would be of the party today. But there it was, and combined with today being the first Sunday of the month, it was time for the 2cvs (and their owners) to congregate together and strut their stuff. 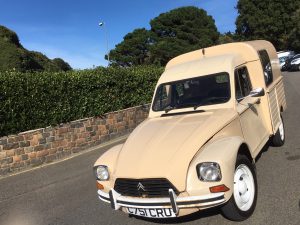 A couple of days before the run, the owner of TinTin CadMan, a fine looking van, had been in touch via facebook to ask if he could join us on our monthly run as he was on the island. And the answer was…. “Not on your Nelly” (only kidding) the real answer was “Of course, this is where we are meeting and the time”.

Titinne was there first as the meeting point was the car park of Murielle’s place of work, but TiTin Cadman was there second, managing to beat all the local cars, Camille, Buzz, Earl Grey, Millie, Cassis, and of course last but not least the burgundy charleston aka “no name”…

It wasn’t long before Matt introduced himself to all, and taking part in the conversations going round the open car bonnets…  In fact the chaps were so engrossed in their technical discussions that they missed one of the ladies (which I do not need to name) , who wanted to grab the attention back, asking if anyone  wanted to “see her hole” … of course she meant, would they like to look at the hole left in her 2cv by the loss of an outside door handle… but a few of us burst out in peal of laughter at this comment.

A change of plan 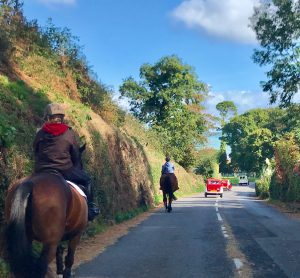 All best plans and all that… the Jersey Marathon kind of foiled ours with all the road closures out West, so we decided to stay East and went for a cuppa to St Catherine break water. Camille was the leader of the pack, and with an Irish owner at the wheel, went the straightest way from A to B. On the way, we overtook another type of “deux chevaux”, leaving plenty of space between them and us and slowing right down.  And we reached our destination in no time at all. Not even attempting the small car park, we all parked behind one another on the verge and headed for the cafe for a hot drink and a chat.

To redeem himself, Camille’s owner proposed that we all take the scenic route to town, which we did. We lost a couple of cars on the way as they took the turnings leading to their homes, and we finally stopped above la Collette to say good bye to every one and wish TinTin CadMan a lovely end to his holidays, and safe return to the mainland.