Well where did the time go? 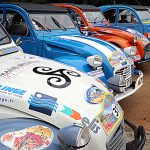 The last update to our club blog  was August, I can’t remember if we went out in September (old age creeping in I think or is it the only onset of Dementia?) but I know I missed the October meeting due to work constraints which was a shame as the 2cv club de Fougeres (FF2) had brought 43 cars over to Jersey for the week end. I did manage to catch up with them on the Saturday and they meet the rest of our club members and cars (the rabble 😜)… (Now I’m going to duck cos one one them will be clipping me round the ears for saying rabble)

All seem to have had a good time on our beautiful island.

Now for this month’s update

It felt like ages since I’d met with the group, and it was lovely to see 8 cars turning up on this  sunny and windy day. A clear blue sky and white fluffy clouds in the sky saw us gathering in the car park at Jardin de la Mer. Titinne was first, she was so eager to get a run. Soon Chris and I were joined very quickly by Cassis driven by Gary and co-piloted by the lively Annie. They had just made it back from a nice hot holiday in Spain and found our crispy weather well…. a tad crispy 😏.

Soon the wonderful sound of 2cv engines could be heard as we were joined by Skippy who was bringing Stacey and her tribe, Lyndon and his wife in their impeccable white 2cv, Clive and Liza in their Dolly, the Grey Charlestons of Jo and Lynne (who had also brought along their hubbies) and last but not least the gorgeous Scarlett with Helen and Debbie.

It was lovely catching up with everyone I hadn’t seen in a while.

Someone in the group had forgotten we were now in the 21st century and to check the time of the meeting on the our website. So, they came in the morning, thought they had missed the group, and drove the final destination of the day (anything for a quiet pint, I think!). They then realised they had the wrong time and joined us in the afternoon, this is despite me sending an email with time and venue earlier in the week….

Needless to say, there was a fair amount of teasing to be done by all !  😀

The drive was straightforward, Titinne took the lead of the convoy as no other volunteers came forward, up Mount Bingham, praying that the car in front didn’t stop half way up the hill as I’m still rubbish at hill starts. From there we took the coast road from St Clement, and… g0t stuck behind the bus !!! After a fairly long time, Titinne decided to overtake the bus when it stopped, and 3 other cars managed to follow her, you owuld have thought the bus would have waited for the rest of the convoy to pass it, but no! It split the group in 2 😡

At Gorey the group became finally whole again and there we went on our merry way to the Royal pub, our (I thought) final destination. However, bad miscalculation on my part, the lunchtime wasn’t over and their car park was full!!!  So all my followers drove in behind me to come back out again and follow me to the tea room in the village who had a bigger car park.

Thankfully, the tea room had enough space to accommodate all of us, unfortunately, we had to split into different little groups as the tables were scattered all around the room. But we did manage to get refreshments and a chat with nearly everyone.

Thanks guys, and I won’t see you at the December one as I’ll be working, but…. send me a write up for the Blog 😎