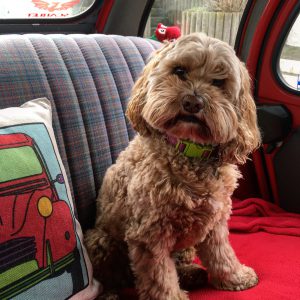 With Jersey Met forecasting a rainy afternoon, Clive announced early on that he was bailing out and staying dry. Others dithered and there was even some suggestion of changing it to a morning drive but it was decided that it was too late to do that. However, Windguru did say no rain until the evening so several decided to go for it!

There was one lonely little Mehari parked in the Highlands car park at 1pm (with Gary and Annie convinced they had the wrong time or wrong venue!) but they were soon joined by Scarlet, Celeste, Blanche, Millie, the AVs and Lyndon and Dinah in their own Blanche! Millie (the dog, not the car) did the meeting and greeting and Eddie came flying in 15 minutes late, convinced he was 15 minutes early for a 1.30 drive !! He is clearly going in to competition with Peter – who wasn’t late today because he couldn’t make it! 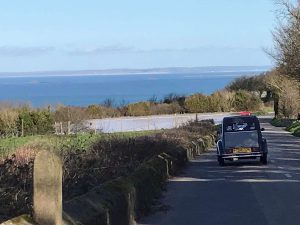 Sun shining and not a rain cloud in sight, we decided to ‘go east’ and have a second attempt at the St Martin’s Tearoom. Scarlet was nominated as leader, a responsible role with a fear of going the wrong way always at the back of the leader’s mind – OK to get lost by yourself, but not acceptable with 7 other cars following!

Scarlet lead up to Five Oaks and then down La Rue a la Dame to Grands Vaux reservoir and up through the tiny lanes that climb back up to Trinity. A skirt past Jardin d’Ollivet and on down towards Rozel hanging a left up towards White Rock. This little lane brings you down into Rozel with views down over the cotils and, today, straight across to a beautifully clear French coastline. 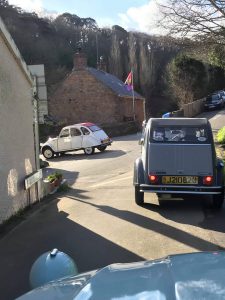 Up out of Rozel and down through Le Villot with beautiful (and still sunny!) views across St Catherine’s and then it was back up the hill to St Martin. The drive was described as ‘non-eventful’ – which I think was complimentary but probably better described by Debbie as ‘strees’free’ !! We did indeed have no traffic jams, no challenging ‘test your reversing skills’, no horses, and no super steep hill starts, (so loved by a few of our drivers!!) so it really was a proper, relaxing ‘Sunday afternoon drive’ 😍

The cafe delivered all the goodies that should go with a ‘Sunday afternoon drive’, including teas, coffees, hot chocolates (the low calorie versions with cream and marshmallows), pastries and scones with jam and cream for the AVs. A lovely February afternoon 😍 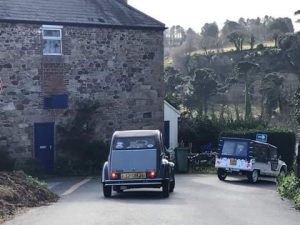 Photo creds: Debbie in Millie and Ben in Scarlet