Amboise, 50th birthday of the mehari

Arrived in Amboise on a lovely sunny day. Our B&B was over the bridge so only 15 minutes walk to the island. The four boys camped.

We were all like children watching all the Meharis flooding in, so many colours and from so many countries including Germany, Holland, Belgium, UK, Corsica, Switzerland, Jersey and so many more. 300 in total.
Well done Eddie you remembered the Jersey flag and the French one too.

On Sunday 6th May we got given our routes, unknown to us two they gave us a different one which confused us a bit, as we told them we were sticking together. Eddie & Peter ‘s were so different to ours so we followed them Spencer and Jed to stay together. 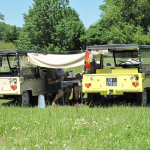 We went off road and went through an amazing forest through a very dusty track and were all covered in dust. Being hot all our doors were off even the back. Spencer went for the half car look windscreen down too.
It was worth it,we’d never have found these beauty spots. We went next to a lake to have our picnic, luckily there was a picnic table and benches. We were lucky to find a boulanger open and had some fresh baguette sandwiches made up.
How the French love their picnics! So organised. Should’ve seen the muddy colour of the water in the shower that night so funny.

That evening paella was cooked for 460 people. They were running a bit late, one of the organisers thought it would be good to go through all 96 departments and get people to shout if they were from any of them! Poor Peter is vegetarian but managed the paella without the chicken.
We had a live band and even fireworks which were brilliant. 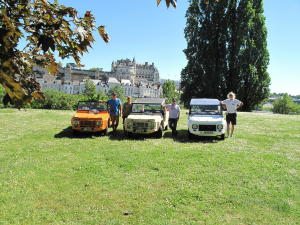 Monday we set off ,saw some beautiful scenery and all had the right routes this time. Ended up having a picnic lunch at a go cart track. Peter fed the goats some orange peel and untangled them as the rope was twisted around their horns. 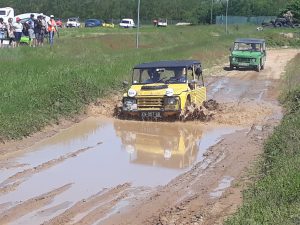 Eddie & Peter did the muddy water trial and started floating it was pretty deep! Our cars can sail. Spencer & Jed went for it too with all the sides down poor Gina & Noddy all splattered with mud. Gary declined there was enough dust and grit inside Cassis from going off road as the doors were off.
Hope you both managed to shift the mud from underneath.

The speed trial was good and I’m glad Gary took the petrol can out first. Although the oil cap came loose, but luckily only dripped onto a shopping bag.
Half expected Top Gear to appear imagine 300 Meharis on the circuit!! 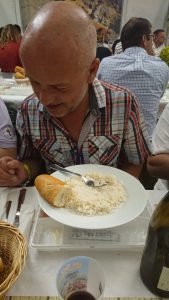 They organised games for us whilst the vehicles were in motion.Collecting plastic ducks and throwing skittles , blindfold test etc
That evening we had rice and a beef stew. Peter had rice and a large piece of baguette. A different band came on and we danced. Well jumped up and down.
It was certainly well organised we all thoroughly enjoyed it and the weather was beautiful.
Seeing how differently these cars had been restored was something else.

We decided to see the pandas at Beauval zoo which was only 40k away and the boys made their way back to Brittany. So glad we went to the zoo it was pure chance we saw a poster, the baby bear is 9 months old. Don’t have to go to China now(all that rice) ha ha

That’s it. Sorry to be missing the June event you will love it. Mum is 90 16th June have plans so can’t make it. Those who are going pack your picnic stuff!! Lynne will be bringing her decanter and silver candelabra. Get some photos and enjoy yourselves