A big thank you to all of you who turned up this morning, despite the horrid start of the day. Glad to see the rain stop and the sun appearing in time for us to drive off from St Catherine. Not a bad turn out, 8 cars,  some ‘old’ faces (sorry boys and girls) and new ones as Phil came in with his grandson, Penny & Stuart who are eagerly awaiting to get their car back from the workshop and a guest appearance from Chris who brought his family to meet us at the arrival line and who is also waiting to get his hands back on his car who has gone to bodywork hospital.

Sadly we missed Sean’s Irish brogue as he is off island, Lynne & Steven as Lynne was unwell (get well soon, and see you next time) as well as Helier, Ron and Catherine. Apologies if I missed anyone. 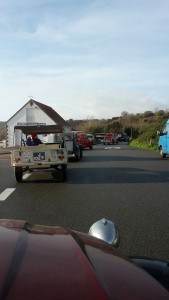 Gary and Annie were the first to arrive in their wonderfully ‘tarted up’ (to paraphrase Annie) Mehari Cassis.  Shortly followed by myself, with more than 30 minutes to kill, we went to grab a coffee and wait for the other cars to arrive. Didn’t we look a treat ? Gary and Annie wore full Santa outfits, I wore red & white and matching stripy stockings, the waitress took a picture to send to the grandchildren in Roumania.

And soon enough, they started trickling in, Jo and Mark arrived in Celeste, then the real Santa Claus arrived, in a white 2 cv.  This was Phil’s first appearance in our little outings and hopefully the first of many.

At 10am we exited the coffee shop and congregated on the car park, Eddie had arrived by then, followed by Helen’s Scarlet who was also carrying Ben and Debbie. I think that Debbie has caught the 2cv bug…  Then our Chairman who just avoided getting the wooden spoon of arrivals because Clive was last on the scene. 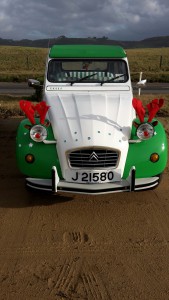 It was lovely to see that almost every one had made an effort to bring some Christmas cheers, the car decorations were amazing, from reindeer antlers and flashy red noses, to tinsel, ribbons and snowflakes and a couple of big Santa balloons twisted by no other than Royston South. The balloons found good homes with the younger generation of 2cv lovers that came on the trek today.

We also had 3 Santas, 1 elf (minus the pointy ears, but she had the red and white stockings), 2 fabulous Christmas jumpers, and lots of Christmas hats and red clothing to be seen. And of course, we had to have 1 Grinch who came has he was, but has he brought plenty of smiles, we let him off.

I think now is a good time to mention that Gary’s trousers had a little accident on arrival in St Catherine, this made the ladies of the group smile as he had to be very careful not to show us his boxer shorts….

10:15, as planned, we left St Catherine, Titinne took point and tried (very hard) to stick to 25 mph to allow every one to stay together despite traffic lights and other road users. 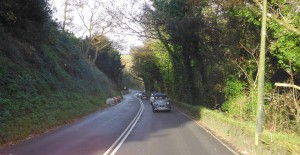 To avoid getting buffeted by the high winds, we travelled through Gorey, up Grouville Hill, through Georgetown, the tunnel, along the avenue, via St Aubin, La Route Orange and then went down La Pulente Hill to reach the five mile road.

Finally we arrived at our destination, the Watersplash. Due to the recent rain, the car park was a bit muddy but no one got stuck (phew)

I’m sure you will agree that our cars, looked very pretty. all shiny in the sunshine…

It was time for the group to gather inside for well deserved coffees, teas, hot chocolate, bacon rolls, etc…  We had some tables and chairs reserved and waiting for us, the only hitch was that there were more of us than anticipated. This was quickly resolved by the staff who brought an extra table and chairs… Beverages in hands, the chit chat and banter quickly started, and although, it was only our 3rd meeting, from the outside, it looked like we had known each other for longer… Not bad for a bunch of people who have 1 thing in common: their obsession with the iconic 2cv or Mehari. 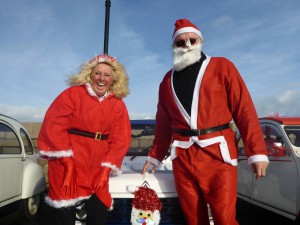 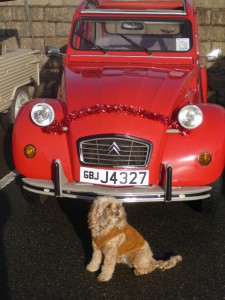 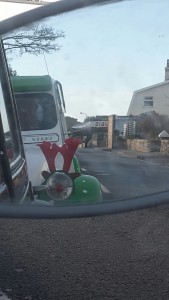 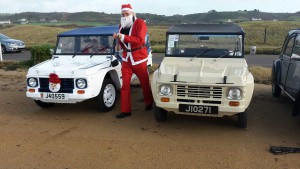 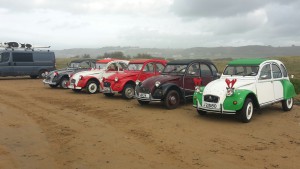 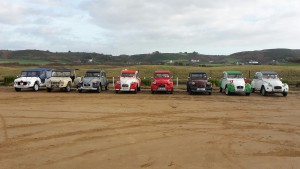