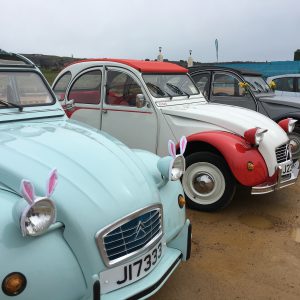 Not having taken part in the last few club runs and meetings due to work commitment, I was delighted to be joining the group with Miss Titinne this Easter week end. Little did I realise that it was also April fool’s day and upon arriving at the rendez-vous point (with about 10 minutes to spare may I say), I thought that perhaps I was the victim of an April fool as Celeste, Jo & Mark were the only one there.

We grabbed a couple of bacon rolls, and before too long (well 10 – 15 minutes after the due time) the others started to trickle in, Eddie, Annie & Gary, Spencer & Julie, Debbie & Allen (Debbie now being the proud owner of Millie, a light blue little beauty). Celeste looked ready for spring today with her lovely daffodils decorations and Millie’s Easter bunny ears gave her a little cheeky look too ! 10/10 for effort to their owners. 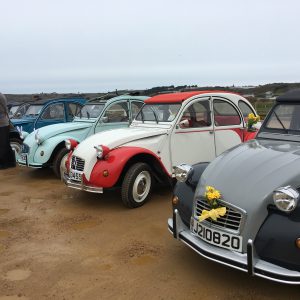 So off we went, with Jo & Celeste at the head of the convoy since she was first on the scene, we cleared some much needed parking spaces at St Catherine and headed towards the West. And as we were leaving, who was coming from other direction? Lynne & Steven in their Earl Grey…. who it, turned out later, had to make a petrol stop on the way which had delayed them.

The route took us through Gorey village, along the coast road, up Mount Bingham, along the old harbour, through the esplanade, where fast Eddie (yes Debbie, the nickname will now stick) decided to leave the group and head toward a petrol station and then home. then through St Aubin, and it later came to my ears that Jo was thinking about going up Ghost hill in St Aubin, but thought better of it or “Murielle (me) will kill me”…. She was quite right there, hill starts in Titinne are not my forte having short limbs, I find hill starts a bit of a challenge….  So thank you Jo for changing your mind 😃. We then drove through St Brelade, down La Pulente to park our rides at the Watersplash to partake in hot beverages and have a catch up.

You don’t have to be mad but it helps….

It downed on me when we left, that all of us lady owners of 2cvs and meharis have got one thing in common, Jo, Lynne, Annie, and myself, are all outgoing and dare I say it, a little bit batty, we still have to discover the batty side of Debbie and Helen, but I am sure we will see it when we go to the French week end in June….

Until next time… keep on driving!