The words from Meatloaf – “It was a hot summer night and the beach was burning” – were hardly running through our minds when we opened the curtains on this cold January morning. We are not soft southeners, however, and when we have a 2CV Club De Jersey meet then we sure have places to go & things to see. A few apologies started trickling-in due to the force 8 winds and general damp stuff, but that would not put-off some of the die-hards. 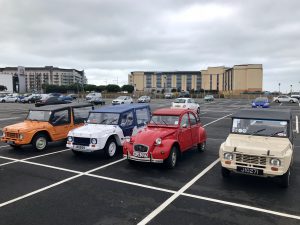 First to arrive at Jardins de la Mer (such an exotic-sounding name) were Annie & Gary in Cassis, soon followed by Helen, Ben, Millie, Debbie AND Allen in a very laden Scarlet. Yes, ‘Debbie does’ have a husband and this was his first meet with the Club in anticipation of Millie their car joining the group sometime this year! Then arrived Fast Eddie sporting his cosy topsides, and finally a new recruit – introducing Spencer and his son with ‘It’. ‘It’ is a super smart Mehari, recently purchased and beautifully restored by his new owner, Spencer Raynes. Spencer had contacted Murielle on the Club Facebook page and enquired if she knew of any Meharis for sale, and lo & behold, Spencer had become ‘It’s owner within a couple of hours thanks to Murielle’s introduction to a willing vendor.

So there we waited for 40 minutes whilst a scattering of classic cars and motorbikes arrived, but no more 2CVs. Scarlet was out-numbered by 3 to 1 by the Meharis which was such an unusual scenario! 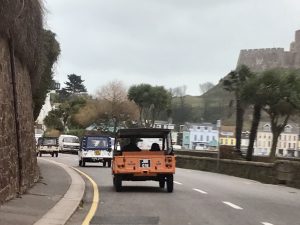 We decided to make a quick exit with the thought of a bacon roll & hot drink at St Catherine’s café in sight. Fast Eddie took off at lightning pace, followed by Cassis, It, and Scarlet. Annie was delighted to follow a fellow Mehari so she could see what a Cassis-type looks like from the rear! ‘It’ had a port lean due to book-reading son being a quarter size of his Dad, but ‘It’s orange paintwork glistened beautifully in the spray. It was to be the quickest route possible today – through the tunnel, Grouville hill, Gorey, & Coast road to St Caths, dodging the waves & holding tight to the steering wheels during the gusts. We literally had to stop on the Pinewalk to wait for a lull in the waves, and again at the Breakwater where the sea was as rough as ever as far as the eye could see.
Phil Rondel (hardly recognisable without his Christmas suit but it was the 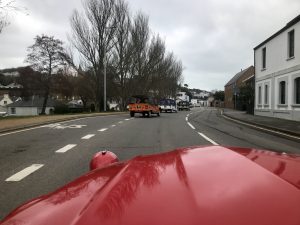 glasses on his head which gave him away) caught up with us at the café and it was soon time for a dive into the wind-battered shelter for that hot drink. We missed our fellow owners, many of whom had work commitments or Tan Hill raids to attend, but we discussed the French Mehari meet in May and the 2CV de Bretagne meet on June 16th, as well as the many local meets we have to come over 2018.
As we left the café, replenished, the words of Michael Buble came to mind – “It’s a beautiful day, the sun is up, the music’s playing, and even if it’s started raining, you won’t hear this boy complaining”……

Happy New Year one & all, from all in the Club! 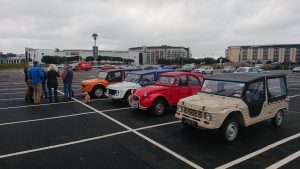 Very last minute decision, got up ready to go heard the wind down the extractor fan, looked out the window mmmmhhhh. Back to bed checked emails in case it had been cancelled.
Imagined our little fibreglass car doing a Mary Poppins!
Decided probably not today, then heard Debbie and Helen the boys and Millie were going. So out of bed again, got ready and off we went.
We sat in the car only ones there. Hooray Helen turned up, then Eddie and another Mehari Spencer and his son arrived. Beautiful orange one.
It was jolly cold standing out in the car park chatting, so we drove to St Catherine’s cafe. Boy that sea was wild!!!!!!!!!!!!!!!!!!
I think Helen had a wave over her car after Anne port.
The vintage cars were meeting at 10 30 for 11 00 so least we got to the cafe before it got busy.
Phil Rondel joined us he is looking well. His white 2cv is not in the photo he parked around the corner away from the sea spray (sensible) 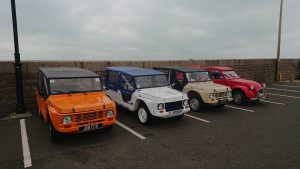 Those waves were pretty scary . We were so cold those bacon rolls were so welcoming.
Think all the cars had a hose down back home sea spray on all of them. Cassis is back in the garage and dry again.
Let us know if we are having a meal out before the next run in February.
Stay warm and safe. Glad we don’t have to go out again today.
Lots to do