A run not for the faint hearted….

Well what can I say? With a weather warning in place for the islands and winds battering our coasts, we dared go ahead with our monthly club run. 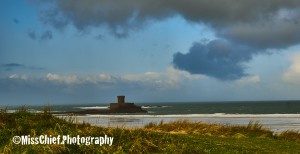 Our meeting place was the car park at Le Braye, I arrived in Titinne, blown in by the rain and gales and narrowly missing a couple of runners who had decided to stop bang in the middle of the road… Strange place if you ask me! Quickly spotted Penny and Stuart in their green peril, and Celeste who had been abandoned there by Jo and Mark who were treating themselves to a bit of breakkie in the cafe.

I was shortly followed by Phil Rondel who came with his grand children, Eddie in Noddy who appeared to be relatively frozen and in serious need of a wet suit… whilst they grabbed themselves a hot drink to take away, I took a walk to the slipway for  and got my face sandblasted to take a sneaky shot at the Rocco tower then returned tothe car park and waited for stragglers. Said hello to a new green and white dolly owned by Polly and Paul, who unfortunately couldn’t join in the convoy today but wanted to meet some club members. And, just as everyone was getting ready to go, Scarlett arrived, carrying Helen and Ben, who kindly agreed to lead the convoy.

So off we went, as we were slowly but surely climbing up the hill to reach St Peter, who do see going downhill? a beautiful black and burgundy Charleston, but hang on, this is our chairman’s car. Peter, dashing to reach the meeting place (late) to participate in our antics.  After a quick U-turn and race up the hill, he managed to catch up with us. We then meandered through the country lanes of St Peter, St Mary, St John, Trinity and St Martin, clogging the narrow roads with our tin snails. Helen took us through a lovely trail and I discovered places i’d never been before. Pushed by the wind, I think we reached a top speed of may be 30mph downhill! 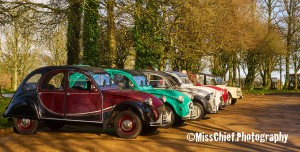 We arrived at destination and parked safely in a huddle, Titinne and Scarlet next to each other so they could discuss having their picture sent to the 2cvGB magazine…  As the showers had passed, it gave us an opportunity to congregate around the cars for a quick chat. 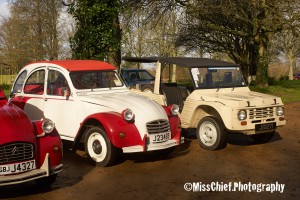 Peter seemed to disappear in the boot of the green 2cv at one stage and that gave me the giggles… well enough of standing around and getting cold feet, we finally queued in the cafe for our hot beverages for what seemed like ages, we congregated to the end area where we could all stand and chat together; arrange the next run and discuss who is going to the national and who is not. 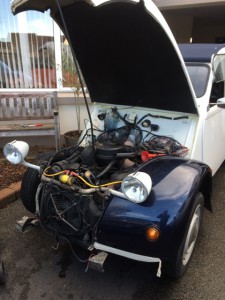 A few of our members coudn’t join in today for a lot of different reasons (away, weather, car in the workshop or in bits) but I was tickled to find an email from Chris in my inbox when I came back, assuring me that yes he did have a car but was still waiting for some parts to arrive… See you on the road at the next run then Chris 🙂